They sure do know how to bring out the buffoon in Olbermanns eyes. How can anyone take Olbermann and Maddow serious?
Posted by Chris at 7:35 PM 28 comments:

Americans Are Just Too Dumb For This Admin.

What are you? Take the quiz and let us know

Are you conservative, libertarian, or liberal? Glenn gives America a pop-quiz tonight at 5pm/2am ET only on the Fox News Channel!

Update: Due to the overwhelming traffic generated by people attempting to take this quiz you might experience significant slow-down or not be able to reach the quiz site at this time.
Posted by Chris at 7:26 PM No comments:

Another Great Example Of The Democratic Party 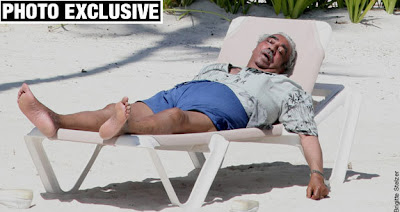 The House ethics committee is admonishing Charlie Rangel for taking free trips to the Caribbean furnished by a lobbyist.

From Politico: The House ethics committee put another dent in the armor of embattled Ways and Means Chairman Charlie Rangel Thursday, admonishing him for violating House gift rules by accepting corporate-funded trips to the Caribbean through an organization called the Carib News.

The committee essentially found that Rangel is responsible for the transgressions of aides who knew of the corporate sponsorship of the trips.

“The committee did not find sufficient evidence to conclude, nor does it believe that it would discover additional evidence to alter its conclusion, that Rep. Rangel had actual knowledge of the memoranda written by his staff,” an Ethics statement says. “However, the report finds that Rep. Rangel was responsible for the knowledge and actions of his staff in the performance of their official duties.”

But Rangel, who read the findings aloud at a news conference, took issue with the concept that staffers’ actions could be “imputed” to him.

“I don’t want to be critical of the committee, but the common sense dictates that members of Congress should not be held responsible for what could be the wrongdoing of, or mistakes occur, as a staff unless there’s reason to believe the member knew or should have known. And there’s nothing in the record to indicate the latter,” he said. “So I have to now deal with my lawyer as to what the hell do they mean that something’s imputed. Does it mean that no matter what a staff member does if the member doesn’t know it that the member could be charged and admonished publicly for it?”

He’s good at this. He’s confident and straightforward. I think it’s a very good thing to do. The real frustration in Vermont, and around America, is over the process. The hope is that this jump starts the discussion. This day has the potential to get the American people re-involved.

The health care bill the president is talking about is a private, not public option. It has several other ideas that are important to Republicans. There’s room there to find agreement and move ahead.

If today ends up being another kabuki dance of avoidance then America is going to have to forge ahead. My hope from the beginning is that we have a bipartisan bill.

Nobody with commonsense in America thinks we can pass a bill that will make everything perfect. If Republicans are going to use these arcane Senate rules to defy a vote on the merits, that’s very disrespectful to the America.

There are many reasons the Republican Party is often referred to as the Stupid Party. Many Republicans thought that after the President overshadowed the GOP at their Baltimore retreat last month, going to Blair House yesterday would just be another PR disaster.
It was anything but.
The GOP won the day so convincingly that even the traditional media had to praise the party for talking issues.
Contrast that with Barack Obama who scowled, berated, lied, and harassed the attendees — not to mention filibustered them.
In the most ironic moment of the day, Barack Obama lectured Virginia Congressman Eric Cantor on having the Democrats’ 2,700+ page health care bill on his desk at the meeting. Obama called it a “prop.” At the same time, Democrats were in the newspapers admitting that, in effect, Barack Obama was using the GOP as a prop in a vain effort to show bipartisanship on health care.
There is bipartisanship on health care. There is bipartisan opposition to it. The Democrats must realize today that they would get nothing out of the meeting. They will now try to force health care deform through Congress on a majority vote in each house.
Only a couple of years ago, Barack Obama praised the filibuster claiming it was what the founding fathers wanted to prevent the tyranny of the majority. Now he is intent on ignoring the filibuster and ramming through health care deform.
If nothing else, today shows the American public that the Republicans have a better agenda, better ideas, and are willing to stand up and oppose a reckless scheme that will increase health care costs.
n people.
Posted by Chris at 7:09 AM 14 comments: