Interest group targets FCC over Net neutrality
Posted by Chris at 10:53 AM 21 comments:

The rallies are just the tip of the iceberg.  A "Defeat Bart Stupak" TV and radio ad campaign will be launched during the swing through Stupak's congressional district.
More and more details will be posted online at: http://www.TeaPartyExpress.org
This will be a historic chapter in the tea party movement and it will take place in Michigan - a state where failed leadership by tax-and-spend politicians has played a major role in crippling the state's economy.
Starting with a survey conducted by the Winston Group, we learn that a quarter of the Tea Party members are in fact Democrats and Independents.

The national breakdown of the Tea Party composition is 57 percent Republican, 28 percent Independent and 13 percent Democratic, according to three national polls by the Winston Group, a Republican-leaning firm that conducted the surveys on behalf of an education advocacy group. Two-thirds of the group call themselves conservative, 26 are moderate and 8 percent say they are liberal.

Next, we have Gallup with a new poll out today that shows Tea Party demographics match up with the demographics of America as a whole, including race! Take that, Keith Olbermann! 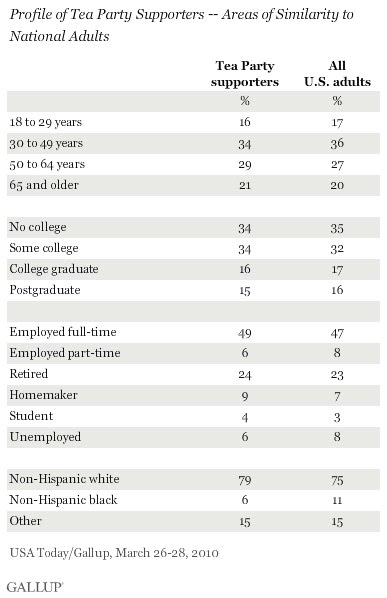 Finally, Rasmussen’s poll finds that on the issues most Americans views line up the Tea Party’s views  rather than Obama’s.

On major issues, 48% of voters say that the average Tea Party member is closer to their views than President Barack Obama. The latest Rasmussen Reports national telephone survey found that 44% hold the opposite view and believe the president’s views are closer to their own.