Thanks John For Your Work At Making This Protest So Large

Thank you John and the other patriots for doing unto the left as they have done unto us. It is a good thing when the media shows that their were more protesters then supporters at the event. Bruce and his ilk say that everything this guy says is a lie but he gives nothing to back up his assurtions. That is nothing more then the lefts gutter snipe tactics. When there is this many more people protesting then are at the event supporting you know that Peters is on the wrong side of the health care issue.  Now for some left wing tactics: These Democrat want nothing more then to kill our kids with this debt and health care reform. They are taking from the elderly and the youth in order to give a health care that will be paid for for 4 years before any benifits are seen. Can Americans afford to pay for something right now that we wont get for 4 more year? How many poor children and blacks will be dieing in the streets because of this "health care reform bill"? What kind of sick people want this bill that will put even more pressure on the working class? No wonder only a few dozen people showed up in support of this bill that will harm the American middle class and poor. And who would believe the cost of this bill when the same people projected the effects of the Stimulus jobs bill and the deficit soooooo wrong? Only the fringe, that's who.

What Excuss Will They Give For The Exploding Deficit Numbers? 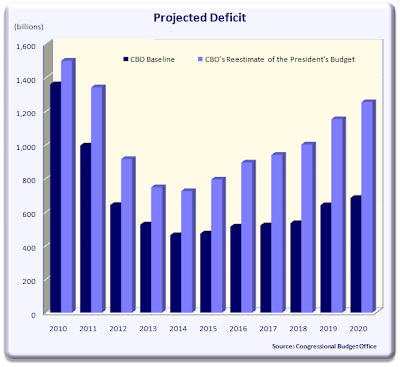 First the stimulus didn't work the way Obama and the Democrats planed. And now their projections for the deficit were way too low. Who care about the deficit or the economy? The Democrats don't seem to care as much as they care about "Global Warming" and "Health Care Reform". Obama said he would "Fundamentally Change America" and that is job #1 for him and the Democrats.  When has Obama been right on any of his predictions? Why would we ever believe a man and a Party that is wrong all the time? And why is it he is always wrong in the worse possible way every time?  Now I know it isn't all Obama's fault and I am not saying it. We have had this Congress for 4 years now and a large part goes to them. It is there time that the deficit has done the greatest growth. And Bush signed on to those deficits. It is obvious that if you vote for a Democrat you are voting to distroy the future of this nation. The Democrat owe too much to too many political interest to do what is right for our nation.  I don't give a crap what party you vote for as long as they are not Progressive and fiscally conservative. This deficit was out of control when Bush and Congress had their hands all over it. But now it is just plan generational plunder. If you left wing want to arrest someone then try arresting the people that are stealing our future. The health care bill will cost us almost $2 tillion, if you believe the data the Democrats provided the CBO. How in God green Earth can you support a health care bill we can't afford? Are you that wanting and careless that you just don't give a crape about the future generations of this country? And don't tell me that that is why you are doing health care. We know what the deficit will do to the next generation. We have no idea what health care reform will do, even if you believe what they say. It time to start living like our grandparents did. We need to make major cuts in household and government spending. The Democrats need to pay for this out of control spending just like the Republicans have payed. By loosing their jobs. I don't want to follow Greece's lead.  I have an old post on Cloward-Piven that you all need to read. Obama used to teach this form of radicalism in college. Do you think he might be implementing it? Either he is a smart man surrounded by smart people that are intentionally destroying our country. Or they are a bunch of buffoons. Either way it doesn't look good for our country. The TEA Party is all about the over spending and higher taxes. It has nothing to do with political party.  If you don't like the spending and taxing part of this admin. then support the TEA Parties. Stop supporting the destruction of our country just because a Democrat or a Republican are doing it. Right now the Democrats are doing it. Yesterday the Republicans did it. We need to support the Party that makes the hard and deep cuts in government. Not the party that grows government that is destroying our future generations. The Progressives like to talk about the killing of people. Well this deficit and economic destruction is killing people no different then any of the leaders the Progressives think are great,Stalin,Mao etc... To fix the problem we need to cut out the Progressive cancer that is devouring our country and our future. Obama and the Democrats are either clueless or intentionaly trying to destroy America. Either way they must go and we the people must make it happen. Tell everyone you know what the government is doing to our kids and grand kids. Lets put an end to it. And when we get in conservatives that will shrink our government spending don't let the Progressives and the unions try and stop the hard cuts from being made. They will say that the conservatives are killing people by closing empty schools and shrinking the over sized government unions. To bad it's time we all suffer together even though it was the liberals that wanted all this spending.
From the AP:

The nonpartisan Congressional Budget Office predicts that Obama's budget plans would generate deficits over the upcoming decade that would total $9.8 trillion. That's $1.2 trillion more than predicted by the administration.

The agency says its future-year predictions of tax revenues are more pessimistic than the administration's. That's because CBO projects slightly slower economic growth than the White House.