From The Powers That Be:

The likes of Keith Olbermann, Bill Maher, Janeane Garofalo and other pasty, whiffle-brained dingbats castigate the Tea Party movement as being nothing more than an all-white racist whine-fest featuring a bunch of crackers who just can’t stand the fact that a black guy has been elected president. There are actually many minorities involved in the Tea Party movement, but why bother the left with the facts?

Go through the large photo album from yesterday’s Coffee Parties. Say what you want, libs, but there’s an awful lot of cream in that coffee. [MORE] 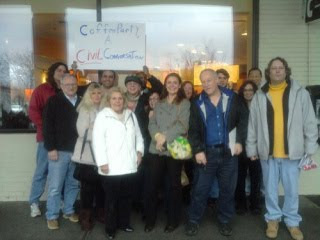 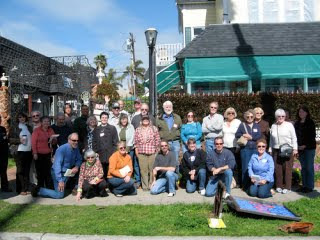 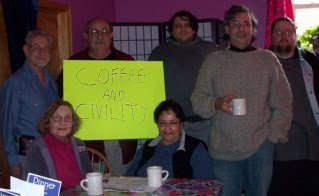 Why only white faces in this Coffee Party photo album? It seems the people that have been calling us the racists look the most like racist. This isn't another case of liberal hypocracy is it? MSNBC called the Tea Parties racist because they diodn't have "enough blacks in the Tea Party rallies", when they don't have even one person other then white as a talking head at that network. Now I'm sure they will go out and hire a token minority as to not bring too much attention to the fact that they are all white. The pictures of the Tea Parties have many blacks in them. In fact what are the odds that the progressive union SEIU found a black Tea Party member and beat the shit out of him? I think it is obvious that the left have some racial issues that they are trying to project onto us. Here are some of our TEA Party protesters the left say don't exist.Liars

I think they were telling us what is in their heart not what is in ours. But they will hurry up and find a picture of a black person and say they are a member of the Coffee Klan Party.
Posted by Chris at 6:16 PM 19 comments:

Democracy Is Only Good When It Serves The Liberal Agenda

Why is it that democracy is a good then when it only serve the Progressive anti-Christian agenda?  They somehow think most Americans are dumb and can't understand what is best for them. But by hook or crook they will jam their agenda even though it goes against the majority vote. It is obvious that Progressives wont be happy until they are ruling over us. Or until we become one nation without God instead of under God. They want change as long as it is us that are doing the changing not them. They would rather have us all obey their beliefs and rituals instead of obstaining from ours. The Progressives want us all to be as miserable as they are. You know the old saying, misery loves company? We conservatives and Christians alike need to tell them what they can do with their attempted domination over we the people. It's time we start telling these liberal crybabies to sit down and shut up when they tell us we need to live like them. This is a democratic republic so move if you don't like it. The East and West coast will take you and you can run the states you choose into the ground like you already have.
Posted by Chris at 11:54 AM 12 comments:

Obama doesn't care if you or I like what he is doing to his country. He has the power and he will use it like he sees fit,not what we see fit. The way he looks at it, America voted for him and the Democrats in office to govern as they see fit. They ran as moderates and now they are far left. The Blue Dog Democrats better wake up and take back their party before it's too late.

This Is Before He Was President.
Posted by Chris at 10:15 AM 6 comments: