Say A Prayer For President Obama and Congress

Labels: Pray for Obama and Congress

The Left Wing Is Getting Even More Unhinged Lately 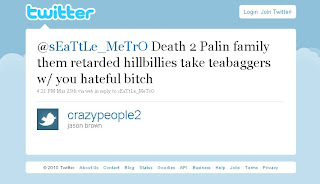 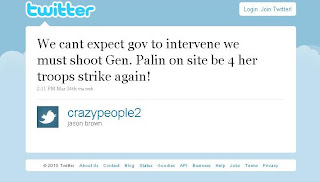 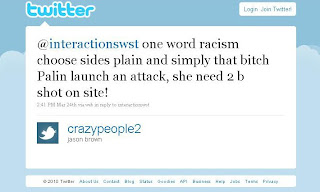 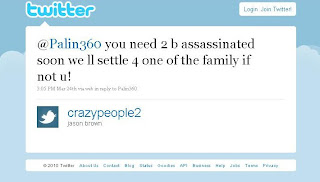 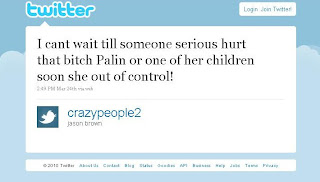 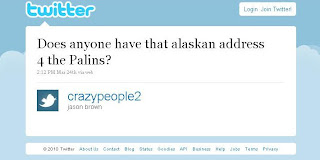 These screen shots are only a sample of what these wacko's tweeted, Patterico has much more. This left wing nut job is a fan of both Keith Olbermann and Rachel Maddow.  I know watching MSNBC rots your brain, but this guy is beyond the pale. 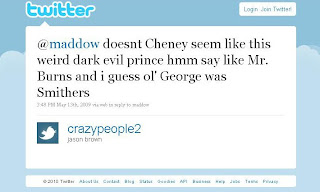 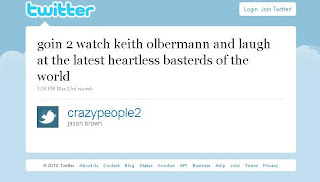 I have said it many time,as well as most conservatives,that we do not condone these kinds of actions. We didn't condone the left when they have done everything under the sun and we don't condone it when the left have thrown bricks at their own DNC headquarters to make it look like right wing violence. This isn't the right wing condoning what might be right wing anger towards the Democratic Party. For a year now the Democrats have been saying the Tea Party will get violent. The Democrats keep beating that drum and the Tea Partiers have proven them wrong every time.  Now ask yourself why would the left think that the right wing rallies would get violent? Could it be because that is the route the left almost always take?  The left have for this same year beat the Tea party members without one left winger saying one thing about the violence from the left. I know it must be hard to believe but I think the left winger condone violence and hate speech when the left does it."By any means necesary" is their matto.  Do you really think it was a smart move for Pelosi and the left wing Congress to walk among the Tea Party protester with a weapon in hand? The left would have called it a weapon if Palin held it.  Well lets just look at this from the lefts point of view from now on. When a left winger has a bullet point we will say they are insighting violence. When Congress walks down the middle of the protesters to throw salt in the protesters eyes we will say they are insighting violence. When the SEIU and NBPP come out and beat our Tea Party members we will say they are insighting violence. Now that we know that the left condone these kind of actions we must judge them the same way they have TRIED to judge us. But we must never ever condone this actions from our side as we will be going down to their level.  But it is not our job to say sorry for every wacko that picks up a brick or a phone in anger. The left and the Democrats in power are trying to make us turn into them. The left want us to become violent to prove them right. But since the media and the Democrats are having so much fun trying to pin the violence on the right we need to do the same to them. When you go out this month I'd like you to talk to people. When you get your food or gas remind the tellers of the violence the left wing has been doing. We need to take it to the streets. We need to remind the people of color that it was SEIU left winger that have been proven to be the racists with their actions. We need to remind them of the terrorist attacks the left have done on this country just this year alone. The media is saying it's the right wing but we need to tell them it's the left. Do not lie,cheat or steal as that is what the left do and they will be found out. But since we now know how much the left hate these actions we need to mandate that they hold themselves to the same standards as they try and hold everyone else. Let the Jews know how Obama and the Democrats are treating the Jews in Israel. Remind the unemployed and working men and women that it is the Democrats that want to give their jobs to illegal immigrant while spitting in the face of the legal immigrants that come to this country. We need to tell every stranger we can about the left wing in this country. Thanks to the right wing liberal and Progressive have become dirty words. Now it is time to make Democrat a dirty word. Tell every American worker you see how the Democrats are hurting them. Tell them how the Democratic party is not the Democratic party of old. Tell them that their dreams of making it big will never happen as long as these new "social justice" Democrats want to spread the wealth. Hammer the truth into everyone you meet. Sometimes just a whisper can become a yell in good time. It's the "Butterfly effect". Make a yard sign and put it up in a median that wakes people up to this madness. But keep it peaceful. We are nothing like the left. But be careful out their because if the left are this dangerous when they win what are they capable of when they lose? If you need an answer to that just look at the pictures of the riots and burning of property after Bush won his second term. Just look at all the death threats that came out after they lost a second time. Their are right wing wackos out there and we denounce them. It is the left that don't denounce it when their comrades in hatred do it. There is a reason why they call us the "Moral Majority".
Posted by Chris at 8:46 AM 22 comments: