NEW YORK (AP) — It was a painful flashback to the darkest days of 2008: Stocks plunged and the Dow Jones industrials skidded by hundreds of points as traders succumbed to fears that Greece's debt problems would halt the global economic recovery.

The Dow lost almost 1,000 points before recovering to a loss of 505 as traders watched protests in the streets of Athens on TV. Protestors raged against austerity measures passed by the Greek parliament. But traders were not comforted by the fact that Greece seemed to be working towards a resolution of its debt problems. Instead, they focused on the possibility that other European countries would also run into trouble, and that the damage to their economies could spread to the U.S.

Computer trading intensified the losses as programs designed to sell stocks at a specified level kicked in. Traders use those programs to try to limit their losses when the market is falling. And the selling only led to more selling as prices fell.

"I think the machines just took over. There's not a lot of human interaction," said Charlie Smith, chief investment officer at Fort Pitt Capital Group. "We've known that automated trading can run away from you, and I think that's what we saw happen today."

Still, emotions were running high. Down 998.50 points in mid-afternoon, the Dow recovered to a loss of 505. Meanwhile, interest rates on Treasurys soared as traders sought the safety of U.S. government debt. The yield on the benchmark 10-year note, which moves oppoosite its price, fell to 3.37 percent from late Wednesday's 3.54 percent.

"The market is now realizing that Greece is going to go through a depression over the next couple of years," said Peter Boockvar, equity strategist at Miller Tabak. "Europe is a major trading partner of ours, and this threatens the entire global growth story."

The stock market has had periodic bouts of anxiety about the European economies during the past few months. They have intensified over the past week even as Greece appeared to be moving closer to getting a bailout package from some of its neighbors.

The losses in stocks were so widespread that just 139 stocks rose on the New York Stock Exchange, compared to 3,029 that fell. The major indexes were all down more than 4 percent.                                 This market is volatile because we are connected to Greece's economy as well as the EU. We are bailing out Greece with our money but they must cut spending and cut contracts with the unions to do it. The unions are rioting in mass and the country is on the verge of collapse. But the good news is thanks to the Democratic Party we are on the same stupid path. But we don't mind giving Greece our workers hard earned money because they squandered theirs. Hell what other countries are we going to bail out now? Will that bitch michelle obama go to one of those nice countries to live? Sorry I had to throw that in. These idiots in the Democratic Socialist Party ruining our country better stop giving away our money for nothing. If Greece defaults on paying off their debts then we are in big trouble. This is Europe's fault and it's their problem. When you see the NYSE go down 1000 points in hours you better start wondering WHY? This isn't a bubble or a normal trend in the markets.
Posted by Chris at 3:32 PM 7 comments:

Now I don't think she meant to say that Barack Hussein Obama was born in Kenya. But it is half of his national origin. What about the white half or doesn't that count to her? But this isn't the part that pisses me off. This bitch disrespected our country again. Who does this bitch think she is talking about our country the way she does? Is that what the First Lady should act like? We are paying for her assistants,and mind you this bitch has more assistants then almost all the First Ladies before her. Come on people since when does the First Lady talk bad about the country they are to serve? And what is with this bitch giving her digs on the "white" people?  Since this bitch doesn't respect the country I give the bitch NO respect back. I'm starting to wonder about the birds of a feather and our President. This is America not Kenya. The Obama family represent America and no other country. This isn't the case with this couple in the White House. I'm sure the left will call out racism on me but I would say the same thing if they were my color. This isn't about color or ideology in the least. This is about having a love for country. And if they loved it they wouldn't want to change it. I demand that the First couple love this country if they are going to serve it's best interest.  How can we trust 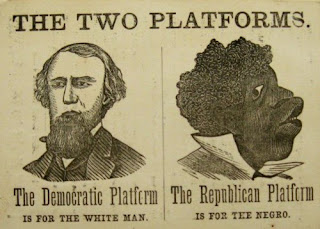 someone that hate the country we love?

Do you see this picture above? Do you see the kind of race politics the Democratic Party played back in the day? They haven't changed the game just the color of the skin. Do you see the game of politics these "Kenyans" are playing against "Whites"? To devide this country the way they are is immoral at best. And it is high time we start calling them out for what they are doing to this country and start demanding that they start having an alegence to this country. If michelle obama can't say anything nice then she needs to sit down and shut up. Stop making everthing about the color of my skin and start treating this country without contempt at every other turn.
Posted by Chris at 12:16 PM 17 comments:

Gore's $9 million mansion and huge carbon foot print nice and close to the "rising ocean"
Former Vice President Al Gore and his wife, Tipper, have added a Montecito-area property to their real estate holdings, reports the Montecito Journal.
The couple spent $8,875,000 on an ocean-view villa on 1.5 acres with a swimming pool, spa and fountains, a real estate source familiar with the deal confirms. The Italian-style house has six fireplaces, five bedrooms and nine bathrooms. Isn't it great how Al Gore preaches to us about our carbon foot prints and how we "MUST" make drastic and costly cuts in our energy consumption. And while we are paying for their left wing air trading scam they will be rolling in the $$$$. But we all know the "Climate" scam was nothing more then a money making scam on we the people. It's time to tell these scamers we aren't buying it any more. I can't afford higher energy bills. I can't afford another tax on my gas and every product that uses gas to get to me. Gas is going higher and higher every day thanks to Obama,right left wing Bush bashers? If it was Bush's fault that gas went to $4/gal then it must be Obama's fault for oil's rising cost's. And as we see with all the BP oil money Obama got we know what side he is on and it ain't ours. This is all about money not the environment and if you truly care about the environment you better look at why the Obama admin. dropped the ball so many times with this disaster? And when the Obama admin. keeps saying that they have their "boots on the throat of BP" take that as code for BP is getting a tax that they will pass on to we the consumer. But for those few left wing idealogues that still feel the need to champion the environment they better find one that is designed to actualy help the environment, not make a way to trade in AIR. Protect the rain forrest or start an organization that will buy land too protect it and all that live in it if you want. But don't tell us this is about the environment when your own enviro-leaders are in it for the money and not for the environment. It's OK if you got scamed like so many. But don't be stupid and keep talking like this isn't a scam in order to save face. The longer you hold on the worse it looks on you.
Posted by Chris at 9:56 AM 6 comments:

After the Exxon Valdez oil spill in 1989, Congress passed the Oil Pollution Act of 1990, warmly referred to as “OPA90″. OPA90 provided for an emergency spill fund so that response for a future spill could begin right away; established the US Coast Guard as the lead agency responsible for spill response; and for the first time required minimum insurance coverage and detailed spill contingency plans for operators of marine vessels, including operators of offshore oil and gas leases.
Another thing that OPA90 did, that seems to have escaped the notice of a legion of plaintiffs’ attorneys and potential claimants: it caps the commercial liability of those operators:

There have been reports in the news media speculating as to BP’s liability, bidding up the amount each time: $1 billion, $3 billion, $8 billion, $14 billion…
I’m no lawyer, but with OPA90, that sounds a tad high to me.
Read more »
Posted by Chris at 7:24 AM 13 comments:

3 die in Athens riot over cutbacks, debt crisis and UNIONS

Liberal/Union Protesters chant anti government slogans outside the Greek Parliament Athens, Wednesday, May 5, 2010. Protesters tried to storm Greece's parliament and hurled paving stones at police, who responded with tear gas Wednesday as tens of thousands of outraged Greeks took to the streets to protest harsh new spending cuts aimed at saving their country from bankruptcy. The banner reads: "The 'haves' should pay for the crisis - Thieves, crooks, despoilers". This is alarming. We need to know that the Democrats are taking us on the same path that Europe is on. If Greece fails we are into them for 17.1% of their debt. Greece and Europe could take us down economically because they made bad financial decisions and they gave the unions everything they ever wanted. Now those unions are willing to destroy the tax payers property in order to get what they want.  Doesn't it sound like SEIU all grown up? It is!