Obamacare Bullies and Punishes The Children

Well, the young adults. However, since 26 year olds are now still considered children under Obamacare, encouraged to mooch of their parents and their insurance policies like new millennium slackers, I feel safe in calling them children. The Democrats, with this bill, are, thus, harming The Children ™ and the newly minted as adults thirty-somethings.
From Hot Air:


Under the health care overhaul, young adults who buy their own insurance will carry a heavier burden of the medical costs of older Americans — a shift expected to raise insurance premiums for young people when the plan takes full effect.
Beginning in 2014, most Americans will be required to buy insurance or pay a tax penalty. That’s when premiums for young adults seeking coverage on the individual market would likely climb by 17 percent on average, or roughly $42 a month, according to an analysis of the plan conducted for The Associated Press. The analysis did not factor in tax credits to help offset the increase.
The higher costs will pinch many people in their 20s and early 30s who are struggling to start or advance their careers with the highest unemployment rate in 26 years.

Great news, huh, oh so hip youth? No jobs for you, yet you will be *forced* to purchase pricier insurance or you will be fined. Like Ed Morrissey, this brought to my mind the irony of all the liberal groups out there who used the youth to push for Obamacare. Primarily, Rock the Vote and their PSA from December. A reminder:


First, you must get past the way that they ask young people to pledge “mind, body and soul”  (no, really) to a piece of legislation and, by extension, the President and a party. Then, worse, the way they are trying to encourage young people to use their bodies as sexual weapons.  Where are the feminists decrying this objectification of our young women, by the way? Rock the Vote is basically saying: “Oh noes! Don’t support the socialization of medicine? We totally won’t kedoodle you.”  If they are really concerned with health, shouldn’t they be discouraging promiscuity with strangers? Although, I suppose it makes sense to them; the left really only knows how to kedoodle America.
Anyway, if you can get past that, the result is the utter stupidity of urging youth to support a bill that actually punishes the young. They will be forced to buy policies they do not need and will pay much higher premiums than the elderly.
You see, this is not only a Redistribution of Wealth, but also a Redistribution of Health.  Younger adults, who do not require the same amount of medical attention and care per year as older adults, will now be subsidizing the medical care of the older adults. Younger adults are better off buying catastrophic insurance policies and paying for regular visits, only when needed, out of pocket. They will no longer be able to do so. They will be required to purchase the works, which premiums will subsidize the “riskier” and more resource-needy of the insurance pool.
And, wait, Obama youth! There’s even more to it. With this new law, insurance companies are bound, by law, to not raise insurance premiums on higher risk groups, like the elderly. How do you think they will do that? By spreading the cost and passing it on to you!


At issue is the insurance industry’s practice of charging more for older customers, who are the costliest to insure. The new law restricts how much insurers can raise premium costs based on age alone.
Insurers typically charge six or seven times as much to older customers as to younger ones in states with no restrictions. The new law limits the ratio to 3-to-1, meaning a 50-year-old could be charged only three times as much as a 20-year-old.
The rest will be shouldered by young people in the form of higher premiums.

This is that “sharing” and “being fair” thing to which y’all pay such lip service. Not so “fair” now, is it? Well, at least you can all take consolation in something. You threatened to “hold out” with people who do not support this legislation. That is the majority of this country, even after its passage. Therefore, at least there is now less of a chance of you procreating. Whew!
Posted by Chris at 7:47 PM 6 comments:

Orlando Sentinal-MOUNT DORA — A doctor who considers the national health-care overhaul to be bad medicine for the country posted a sign on his office door telling patients who voted for President Barack Obama to seek care "elsewhere."

"I'm not turning anybody away — that would be unethical," Dr. Jack Cassell, 56, a Mount Dora urologist and a registered Republican opposed to the health plan, told the Orlando Sentinel on Thursday. "But if they read the sign and turn the other way, so be it."

The sign reads: "If you voted for Obama…seek urologic care elsewhere. Changes to your healthcare begin right now, not in four years."

Estella Chatman, 67, of Eustis, whose daughter snapped a photo of the typewritten sign, sent the picture to U.S. Rep. Alan Grayson, the Orlando Democrat who riled Republicans last year when he characterized the GOP's idea of health care as, "If you get sick America … Die quickly."

Vote here: Is Dr. Cassell within his rights to want Obama supporters to go elsewhere for care?

Chatman said she heard about the sign from a friend who was referred to Cassell after his physician recently died. She said her friend did not want to speak to a reporter, but was dismayed by Cassell's sign.

"He's going to find another doctor," she said.

Cassell may be walking a thin line between his right to free speech and his professional obligation, said William Allen, professor of bioethics, law and medical professionalism at the University of Florida's College of Medicine.

Allen said doctors cannot refuse patients on the basis of race, gender, religion, sexual preference or disability, but political preference is not one of the legally protected categories specified in civil-rights law. By insisting he does not quiz his patients about their politics and has not turned away patients based on their vote, the doctor is "trying to hold onto the nub of his ethical obligation," Allen said.

"But this is pushing the limit," he said.

Cassell, who has practiced medicine in GOP-dominated Lake County since 1988, said he doesn't quiz his patients about their politics, but he also won't hide his disdain for the bill Obama signed and the lawmakers who passed it.

In his waiting room, Cassell also has provided his patients with photocopies of a health-care timeline produced by Republican leaders that outlines "major provisions" in the health-care package. The doctor put a sign above the stack of copies that reads: "This is what the morons in Washington have done to your health care. Take one, read it and vote out anyone who voted for it."

Cassell, whose lawyer-wife, Leslie Campione, has declared herself a Republican candidate for Lake County commissioner, said three patients have complained, but most have been "overwhelmingly supportive" of his position.

"They know it's not good for them," he said.

Cassell, who previously served as chief of surgery at Florida Hospital Waterman in Tavares, said a patient's politics would not affect his care for them, although he said he would prefer not to treat people who support the president.

The notice on Cassell's office door could cause some patients to question his judgment or fret about the care they might receive if they don't share his political views, Allen said. He said doctors are wise to avoid public expressions that can affect the physician-patient relationship.

But she noted in an e-mail to the Orlando Sentinel that "physicians are extended the same rights to free speech as every other citizen in the United States."

"I'm disgusted," he said. "Maybe he thinks the Hippocratic Oath says, ‘Do no good.' If this is the face of the right-wing in America, it's the face of cruelty…Why don't they change the name of the Republican Party to the Sore Loser Party." 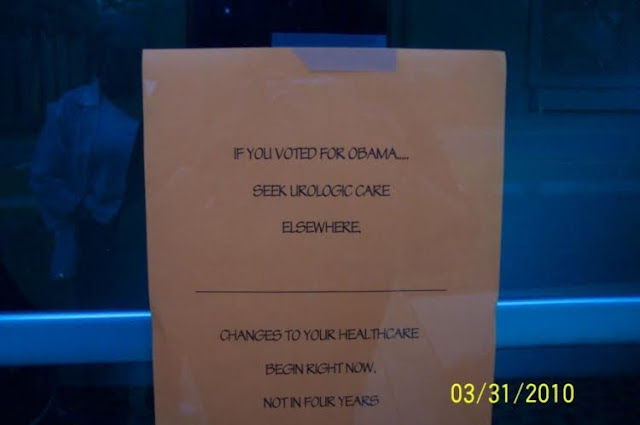 We told you that you wouldn't like this Democrat kind of change. I think more Americans need to make the Obama supporters pay since they exempted the unions from paying. They wanted it so only they should get it.  The Democrats had no problem pusshing all the change and cost onto us while the Democrat unions and states get special treatment. Turn about is fair play. And there will be a big turn about coming in the next few years. We need to stick the unions with the bill since they wanted it and give Congress and their families the same health care we will get. And when they bitch and moan about it just tell them to sit down and shut up because we are speading the wealth so the Democrates have to pay their fair share of this obamacare.
Posted by Chris at 8:42 AM 34 comments: