Arizona Brace Yourself Because The Violent Liberals Are Coming Unhinged Again


Video from Reno of Mexican flag being flown above US Flag, United Sates Army vet cuts it down
More violence in Arizona over  Senate Bill 1070. It seems as though the left are at their violent thug ways of gaining power. Is this any way to protest? Where is the media on all these clashes and riots? Are they too busy warning their viewers of the impending danger from the conservatives? And they have the gull to call Fox News "Faux News". I wouldn't put it past the left to try and mymic what is happening in Arizona in other states.  All it will take is one cop to bash the head in of one of these rioters and Obama will send in the troops to take over. Right now in Chicago lawmakers want Obama to send in the national guard to help fight the crime. And Detroit,another progressive run city,is no better then Bagdad. If you voted for change and hope is this what you expected? We use the European model and get European riots. Who would have thunk? We did.

16% Of Americans Are Tea Partiers

The left wing media is at it again. They are saying that the Tea Party is nothing more then a fringe group at only 16%. Even Ed Rendell has come out calling the Tea Partiers a fringe group not worth worrying about. 16% is the magic number for liberals and the media. But what I have a hard time understanding is that liberals only make up 20% of Americans and they are calling us Tea Partiers,mind you 40% of Americans are conservative, a fringe group? Is 4% all it takes to become main stream in the liberal world? The good thing is as Tea Partiers keep growing,liberals are shrinking in numbers.
Posted by Chris at 11:16 AM 4 comments: 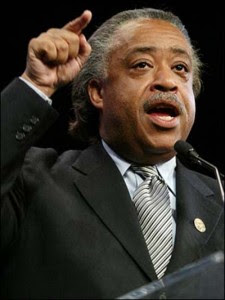 T NEW YORK -- The Rev. Al Sharpton says he's ready to travel to Arizona and march in the streets to protest the state's new immigration law.

Sharpton joined Lillian Rodriguez Lopez from the Hispanic Federation in New York City on Sunday to speak out against the law. They say activists are prepared to commit civil disobedience to fight it.

Arizona Gov. Jan Brewer signed the bill Friday. It requires police to question people about their immigration status - including asking for identification - if they suspect someone is in the country illegally.

The law will take effect in late July or early August.