Where Are All Those Radical Dangerous Conservatives The Left Have Been Warning Us About? 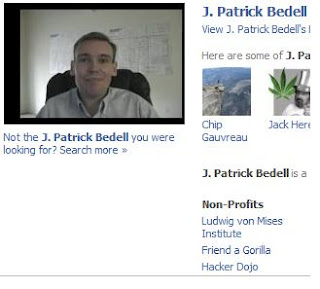 The LA Times is reporting that Bedell was a 9/11 Truther and was angry about government enforcement of marijuana laws.


Washington - The gunman in the Pentagon shootings may have harbored resentment for the military and had doubts about the facts behind the Sept. 11 terrorist attacks.

John Patrick Bedell, 36, died after exchanging gunfire with two police officers, both of whom were wounded.

In an Internet posting, a user named JPatrickBedell wrote that he was determined to see justice for the 1991 death of Marine Col. James Sabow in Orange County, which was ruled a suicide but has long been the source of coverup theories. The writer said the case would be a step toward revealing the truth behind the 9/11 "demolitions."

The same posting railed against the government's enforcement of marijuana laws and included links to the author's 2006 court case in Orange County for cultivating marijuana and resisting a police officer.

Court records available online show the date of birth on the case mentioned by the user JPatrickBedell matches that of the John Patrick Bedell who was killed after opening fire outside the Pentagon.

What a shame this is. Now I have no doubt that there will be some right wing nut job out there that will do something crazy like this. National Security and the left wing have been warning us about the right wing extreemist,Ron Paul loving,anti-abortion activist,Christian Constitution loving would be domestic terrorists that will be coming. But in the mean time the left have had numerous riots and attacks on American citizens and their property. As we speak the left wing is planing an attack on Americans civil liberties. They are planing to detain insurance company lobbiests in the hopes of causing some attention to their socialist causes. Thank God for Americans like Mark Adams that have no problem with calling the LAW on these would be criminals. We conservatives have been letting these left wing psychopaths define  us and our great nation. Do you really want to let a fringe 20% define anything other then themselves? We are not the extreemists by nature. They are. We need to define them for what they are not by what they tell us. They painted a picture that the right wing is dangerous when their actions are what has been dangerous. That scarlet letter is on them. And if you on the left want to get into a pissing match about who has done the most extreem things then game on. But you will lose. Just this year alone you are up 5 to 1. If we go into the Bush years we will see what kind of left wing psychos you have within your rank and file.
The left are going around saying things like,"Are we so afraid of an African American President that we are arming citizens out of fear of some imaginary enemy? This is a bunch of white guys putting 50mm machine guns on the back of trucks. This is truly scary, especially putting it in context with the 400% rise in hate groups in America."  This is just a left wing diversion tactic. It has worked well for them in the past. The question is will we let it work on us now? The left need to paint us as evil dangerous people. Even though they have been doing almost all the dangerous racists things. Remember the beatdown the SEIU gave that black tea party member? Do you remember them calling him a "F"ing "N" word while beating him? Do you remember the New Black Panthers with billyclubs at the voting boths? We need to give these liberals a taste of reality on what they pretend is happening and what is really happening. Reality needs to check their fake fearmongering. Politicaly Correct is going to be defined by the majority and not the fringe anymore. And the left are the dangerous ones,just look at the facts.