Sarah Palin Calls For Rahm Emanuel To Be Canned 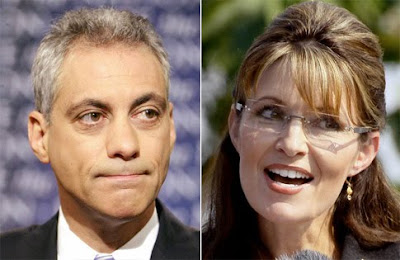 Sarah Palin calls for Rahm Emanuel to  be canned for calling a progressive group’s idea to target moderate Democrats with attack ads “f*cking retardes". This after Obama had made fun of the Special Olympics.  What do the progressives have to say about being called "f*cking retards" by a Democrat of all people? This is getting comedic.We have seen racism from the left,bigotry of Christian and Jews and a genocidal war on people with Down Syndrom and other disabilities. When their is 1 out of every 150 kids born with Autism today the Obama admin better stop looking down on the least of Gods creatures.

Are You Capable of Decency, Rahm Emanuel?

The newly-released mind-boggling, record-smashing $3,400,000,000,000 federal budget invites plenty of opportunity to debate the merits of incurring more and more debt that will drown the next generation of Americans. Never has it been possible to spend your way out of debt. So... let the debate begin.

Included in the debate process will be opportunities for our president to deliberate internally the wisdom of this debt explosion, along with other economic, military and social issues facing our country. Our president will discuss these important issues with Democrat leaders and those within his inner circle. I would ask the president to show decency in this process by eliminating one member of that inner circle, Mr. Rahm Emanuel, and not allow Rahm’s continued indecent tactics to cloud efforts. Yes, Rahm is known for his caustic, crude references about those with whom he disagrees, but his recent tirade against participants in a strategy session was such a strong slap in many American faces that our president is doing himself a disservice by seeming to condone Rahm’s recent sick and offensive tactic.

The Obama Administration’s Chief of Staff scolded participants, calling them, “F---ing retarded,” according to several participants, as reported in the Wall Street Journal.

Just as we’d be appalled if any public figure of Rahm’s stature ever used the “N-word” or other such inappropriate language, Rahm’s slur on all God’s children with cognitive and developmental disabilities – and the people who love them – is unacceptable, and it’s heartbreaking.

A patriot in North Andover, Massachusetts, notified me of Rahm’s “retarded” slam. I join this gentleman, who is the father of a beautiful child born with Down Syndrome, in asking why the Special Olympics, National Down Syndrome Society and other groups condemning Rahm’s degrading scolding have been completely ignored by the White House. No comment from his boss, the president?

As my friend in North Andover says, “This isn’t about politics; it’s about decency. I am not speaking as a political figure but as a parent and as an everyday American wanting my child to grow up in a country free from mindless prejudice and discrimination, free from gratuitous insults of people who are ostensibly smart enough to know better... Have you no sense of decency, sir?”

Mr. President, you can do better, and our country deserves better.

A White House official emails that Rahm Emanuel has acknowledged calling liberal Democrats "retarded" and apologized for the remark.

"Rahm called Tim Shriver Wednesday to apologize and the apology was accepted," the official said.

Shriver is the Chairman and CEO of the Special Olympics, which has launched acampaign against what it calls "the R word."

The remark was first reported last week in the Wall Street Journal, and drew an extended attack from Sarah Palin.

Said the official, “The White House remains committed to addressing the concerns and needs of Americans living with disabilities and recognizes that derogatory remarks demean us all.”

UPDATE: A Democrat points out Rahm apologized to Shriver, but not to the liberals he called "retarded."