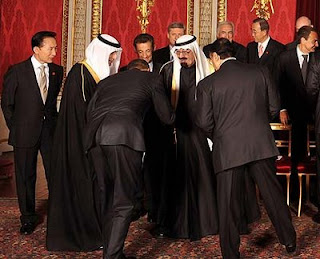 Obama Bows To Emperor of Japan   First off I wouldn't mind the bow if he had done it right. I don't know who told Obama to bow to the Emporer of Japan but it was a dumb thing to do. It wasn't done right so Obama looked bad to the Japanese, most Americans and the world. As a person that studied Japanese culture and lived it he looked stupid doing it. The first thing I learned when I went to Japan was how to bow. It needed to be done right or it would be worse then not bowing at all. Musashi would have said he gave the reccessive bow. When I first heard about the bow I thought it wasn't a big deal. But when I saw the bow I laught at what a dumb Biden like gaff it was. But in reality the world is laughing at us because of this stupid little thing. But in all reality I wish this was all we needed to worry about with Obama. This story isn't a big deal compared to all the other things that are going on right now. I just wanted to give my perspective. I know we have some Japanese citizens reading this blog so feel free to post your opinions. Feel free to post it in Japanese if you would like.